Trading In-Running in the Win Market 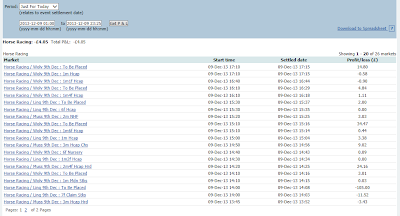 I'll probably visit the coast over the New Year with the missus and then maybe hit Broadstairs in February for the Blues Bash. We went back in 2011 and had a great time. It's usually well freezing down there so not exactly ideal drinking conditions (very good for curing hangovers though) but they have a great line-up of free live acts in a lot of the local pubs over the weekend so it's well worth a visit.

This guy played last year but for some reason we didn't go ....

Trading in the Win Market

So I have one observation about trading in the win market (especially over the jumps). Here's the scenario:

I've backed a runner early in the race and it travels and jumps well. I'm sitting pretty and into the green zone and then the price starts to drift alarmingly for no apparent reason and I'm forced to take a red. The horse then continues to travel and jump well and after a lovely spike it then comes crashing down in price to well below where I had originally backed it. I then sit and swear at the screen and kick the cat/dog/wife. It's even more frustrating when the beast goes on to win.

So what the fuck is happening? After a bit of head scratching I'll have a stab in the dark as to why this occurs:

The 'backers' who are all in the same boat as me (sitting on a nice potential green but holding on for more) are thrown a curved ball when someone takes a contrary view and decides to lay the selection. Maybe it's a genuine opinion, although highly unlikely, or maybe it's pre-race backers, dobbers or tick-offset merchants bailing out early for a quick profit? I don't think that it really matters why this move starts as it's the knock-on effect that is easier to explain. This move, seemingly against what is actually happening in the race, then starts a knee-jerk reaction where the backers who were sitting pretty now also want to bail out for a profit as they see the price moving against their position. The sheep then follow and before you know it a beast that is jumping and travelling well has inexplicably drifted like a barge. So in my opinion it's a simple case of a) people panicking and b) joining in on the crowd mentality.

So it's time to grow some bollox (again) and possibly even back again as opposed to bailing whenever this happens? Only time will tell ....

I've also re-visited the pre-race market and I've started trying something based entirely upon WOM and that may develop into an interesting little experiment. Once again I'll let you know how this progresses ...

+£81.94. Another fun day trading in the win market. The exciting thing is that I'm still playing for relatively small stakes and I think that I can scale-up quite a bit. The last few days have give me the incentive to push on with updating my horse notes. This is a pretty time consuming and boring process but gets easier as I get them up to date. I need to try to make sure that I have all of my notes compiled a day in advance as that makes things a bit easier to manage.I'll also take a look at the Betdaq/Ladbrokes IR markets tomorrow to see if there has been any improvement in the liqudity since I last looked. 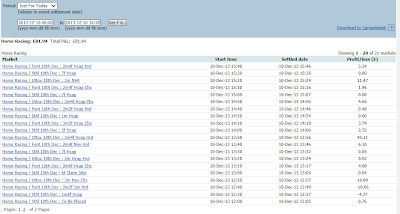 OK, time for something a bit different. I remember taking a chance and buying this before I'd even heard it and on coming out of HMV in Oxford Street one of the security guards saw what I had purchased and said that it was one of the best albums he had heard. Rap you either love it or hate it ...

+£60.90. Lingfield and then Kempton were both cancelled due to heavy fog so we were left with a bag of shite from Hexham and Leicester. We did have Dundalk in the evening but that was practically impossible apart from the last race where I clicked one right on the line for £200+ (after a couple of beers) and it scraped third by a gnats cock. 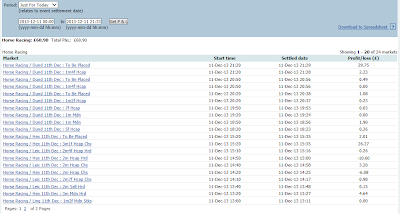 Hey, it's only 10 days to the shortest day of the year and then it's summer here we come!!

I'm not too sure when I got hooked on Les Mis but I think that it's fucking fantastic and still brings a tear or two to my eyes whenever I watch it, either the 10th anniversary stage production or the film. Fucking superb ... 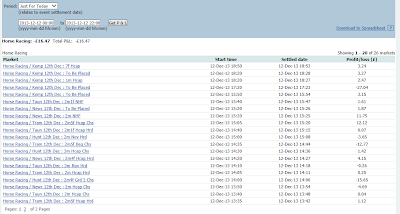 I'm holding onto my in-running greens for a bit longer and that has meant that I have missed one or two £30-£40 greens but I think that I'm due to hit a few £70-£100+ (and possibly more) greens in the near future. Remember that I'm still a novice in the win market so it's work in progress.


Once again I can't say that I'm the biggest Amy Winehouse fan but a girl in our local drinking establishment (when it was still open) loved to sing this on the karaoke every Sunday night and it kinda grew on me ...


Amy Winehouse - Back to Black

I'm out on a heavy Xmas drinking session with my mates on Saturday. These are my best mates from back when we were all about 8 years old and we still make sure to keep in touch, especially at Xmas. We're heading off to Camden and I'm slightly nervous as they are all skilled in the art of drinking copious amounts of alcohol and I can see myself being tailed-off and left in the gutter. I might have a few Hoegaardens tonight just as a warm-up!

On our Xmas outing two years ago I got absolutely wankered and literally stumbled from somewhere in the West End to Old Street. I didn't know where I was walking, can't remember crossing any roads but can remember throwing up along the way. I did stop and sit down at a few bus stops but every time a bus came along I couldn't even focus to see the fucking number or where it was going! I somehow found myself in Old Street where I had worked many years ago and finally managed to get a mini cab back home. Ah good times .....

-£60.38. Friday the fucking 13th eh? I traded like a zombie on crack today. Most of my trades in the day probably weren't too bad but my loss in the first at Wolves was criminal. I'm off out tomorrow night so could do with winning some beer/kebab/hooker(s)/bail/cab home money.

I stumbled across this man maybe a couple of years ago and he possibly has to be one of the best blues guitarists that I've ever heard ... and he can sing as well!

+£7.56. Kind of felt as though I had to push things a bit today as I wanted an afternoon kip before I ventured out on the piss. Played a couple of races poorly and just about broke even. 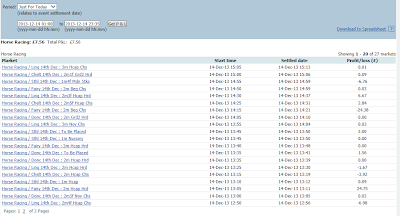 I think that I first heard this in The Belgian Cafe down in Ramsgate where they have quite a bit of regular scheduled and impromptu music. I've just cracked open a bottle of red (added on Friday evening, so jumped ahead of myself here) so I'm feeling a bit bluesy ...

I was up late one night and managed to catch Jarvis Cocker on the Jools Holland show and I really love this song ...

-£44.72. Not a particular enjoyable day today. You know when you have that feeling that it's going to be a shite day and nothing seems to go right .... well that was today. I wasn't going anywhere fast and then I blew £55 in cold blood when I went to back a horse and managed to move the cursor onto the horse above it (I've probably still got the shakes from all that alcohol I consumed) and stood to win about a million pounds as the fucker had fallen or was 10 miles behind. 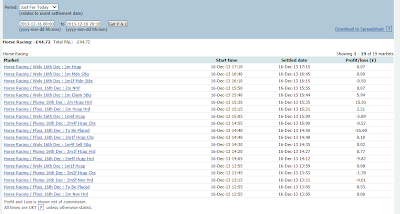 The in-running markets seemed to be a bit all over the place today and a prime example was the race won by Act of Kalinisi. The horse took an early lead and the price shortened accordingly. The commentator then mentioned that the pace was strong, so the price then went on a big drift. The commentator then exclaimed how it had now stretched on and had gone 5 lengths clear and the price fell like a stone. It often happens that a big move will occur immediately after the commentator mentions something positive/negative about the horse and this move is often way too aggresive compared to what is actually happening.

I couldn't wait for the racing to end as I was still fucked from the weekend and hit the sack for a late afternoon snooze.

I think I was eleven or twelve and every other music lesson we were allowed to bring a record (vinyl yep) into school to play for everyone in the class. One of the guys was right into his music and brought in 'Presence' by Led Zeppelin. Whoah I was blown away and have been a Led Zeppelin fan ever since ...