Ham, Egg and Chips Anyone?


So I'm back from a fantastic couple of days down on the coast with all of the family and come Saturday I'm right ready for action and looking to increase my pre-race trading skills. I've watched loads of training videos and read plenty of articles and I know that you have to be primed for action, almost like a tiger waiting to pounce on it's prey, all muscley, tuned and ready to spring into action like a greased bolt of lightening!

So I'm sitting in front of my monitors when the RUK bods interview George Margarson, the trainer of the favourite Lucky Kristale, and not only does he say that his beast will win but actually that it's going to win easily. Obviously this is a traders dream as the price is only going to go one way.

Here's what I was doing at that exact point in time ... 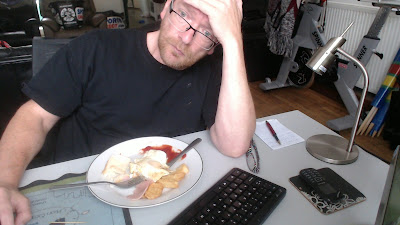 Yep, tucking into a plate of ham, egg and chips! What a pratt. Now as we all know (according to the women in our lives) men can't multi-task, so it was either the grub or the trade! I sat there with my gob full of munch and watched as the price took a nosedive and thousands were being matched. I coulda and shoulda won a nice few quid but then again I was fucking starving and nothing was going to get in my way of my next mouthful!

As usual the racing was hectic for a Saturday and there was little chance to get involved in the pre-race markets, but when I did I played sensibly and cautiously.


+£114.66. Currently I'm trying to immerse myself in as much pre-race trading information as posssible. I've been studying Caan Berrry's video package material which explains his mindset, approach and demonstrates exactly how he trades. I've also been watching some of the material that is available on YouTube. I recently watched this one from Peter Webb a number of times and I think that you can learn a lot from this video, in particular the thought process behind the trade itself.

When watching these videos don't take everything for gospel and see if you can see any mistakes, errors of judgement or different angles of opportunity from those that are being presented!

I was chatting with my good trading buddy Andy earlier today and he mentioned the book 'Trading in the Zone'. I did read the first half when I last looked at the pre-race trading game and it contains some good informtion. However, the book that I really like is 'The Daily Trading Coach'. I must admit that it's been gathering dust since I last looked at it, but I'm sorely tempted to dust it off, stick it in my bag and head off back down to the coast on Tue-Wed for a couple more days. It would be foolish to waste any more nice days now that we are almost in September!

PS If you search the internet you might even be able to find some free PDF copies of both of the books mentioned above.