Yep here comes the Summer! Apparently it's going to get well hot over the coming weekend so it's off to the coast for me for some cycling, sun, Hoegaarden and late night guitar twanging in The Belgian Cafe.

Unfortunately we all know to well that the Met Office are generally fucking shite at predicting the weather so come Friday it'll probably be freezing cold and pissing down with rain!

It's a right fucker as it's June already and the summer months are short enough as it is so that currant bun better start shining! I'm literally gagging to get down there and have a crack and chill out!

+£166.21. I never really got going in the afternoon and struggled to make any headway but then had a couple of wins in the early evening which made the total a bit more respectable.

+£436.21. My recording equipment arrived today and to be honest after I had that very nice win I couldn't be arsed with the trading as I was fucking about with my new toys! 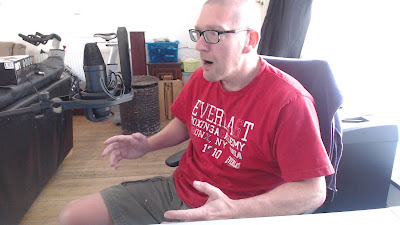 The trade itself was a very strange one as initially the market went against me big style and I was looking at a £70+ loss! It was a crazy move in my eyes so I sat with it and then it swung back in my favour and I then had a great position which just continued to get better and better!

+£53.01. Unfortunately when I received my XLR cable yesterday the pins were slightly bent so I had to order a new one and that arrived today. That now meant that I pretty much spent all afternoon fucking about recording stuff and playing with the software which meant that my concentration on the job at hand was pants. It was no surprise that I had 3 losses in a row which saw me do the best part of £120. Somehow I managed to get back into profit between singing and guitar strumming!

+£56.87. Once again I spent most of the day fucking about recording shite and once again I won fuck all ... what a nobber!

I did however manage to cobble together some acoustic guitar, a little bit of lead guitar, some lyrics and a video of me cycling back from Deal to Ramsgate after 6 pints!

+£124.59. I didn't trade all of the races today as I was heading out on the piss again in the evening so I had a crafty nap mid-afternoon! I do find Saturday's can be kind tough so I had to settle for enough to cover a couple of minicabs and a few sherberts with family and friends.

I also managed to record another small vocal clip with a backing track from a free midi site and some lyrics that I conjured up from deep inside ...


The video was from when I got kicked out of The Belgian Cafe at just after 03:00 in the morning after a right good session on the Hoegaarden and then grabbed my bike and cycled through the night to Deal! It was something that I had always wanted to do and cycled along pitch black deserted trails with only my super powerful torch to guide me and prevent me from going headlong into a ditch! It was a fantastic experience, from what I remember, and this was Deal at around 05:00 in the morning ... it was beautiful.

+£234.04. I quite enjoyed trading today even though I started off slightly behind due to an early loss. The races seemed to flow smoothly and we didn't have any clashes. I kinda like the low liquidity and volatile Irish markets and on a relatively busy Sunday the winnings soon added up.

To complete my recording studio setup I realised that I needed some monitors (speakers) and stands so I really wanted to win enough yesterday to cover the cost (about £300). Todays winnings on top of yesterdays give me enough, so bollox to it, I'll probably order some tomorrow ...


Now that's NOT my desk as it's far too tidy but with a bit of effort I can get all of my clutter sorted and it'll look OK and more importantly be really functional.

+£105.42. I'm actually updating this next part of the blog on 10/06 as I've been a bit lazy and have fallen behind on my blog updating duties doh! Plenty of trades today but a poor result based on the number of races ...

+£30.51. I had a poor start to the day and spent the remainder of the evening just trying to get my head in front on the day.

+£249.07. A much improved day today with most of my winnings coming from the evening meetings.

I took opportunity of the improved weather and shot down to the south-east coast for a couple of days. I made it to Ramsgate by around 07:30 on Friday and had a pint of Hoegaarden as a livener outside The Belgian Cafe and the weather was already OK. I cycled up to the station and got the train to Whitstable and then cycled along the coast to Herne Bay and grabbed my second pint, this time Oranjeboom, and sat outside The Rose Inn. From there it was on to Reculver and my third pint, this time Fosters, outside The King Ethelbert.

It was now warming-up nicely and the strong tailwind made my jouney to Minnis Bay a lot easier, whereupon I indulged in my fourth pint, a pint of Amstel, outside The Minnis. At this point I started to feel the effects of a lack of a recent outing and the jouney to The Jolly Farmer at Monkston Airport began to sap my energy and my glutes were starting to burn ever so slightly. My fifth pint, a pint of Carling, outside The Jolly eased the pain and provided some brief respite. It was then back on the bike for the final leg of the journey back to The Belgian Cafe where I administered pints six and seven, Hoegaarden of course, purely as a medicinal treatment!

After clambering back onto my bike I cycled up to the B&B and hit the sack! My plan was to sleep for a few hours and then indulge in an evening session. However, each time that I woke up I still felt knackered and SO comfortable in bed that I kept saying to myself  'just 1 more hour then I'll go out'.

So following my Saturday effort I bounced out of bed early doors Sunday and hit The Belgian Cafe (without my bike) and setup camp outside in the sun. The Hoegaarden was flowing very nicely indeed and I managed a little bit of reading, guitar twanging, lyric writing and chatting to various locals. To be honest I was a bit of a lightweight as I was only into my fifth pint when I got the munchies and ordered a full english breakfast. Now this was just fantastic, as apart from a couple of scones yesterday it was the only thing that I had eaten in 2 days. However I can never usually carry on drinking after a decent meal and I hit the wall after pint number 6, so once again I ventured back up to the B&B and hit the sack again.

Now I don't know whether or not it turned a bit nippy but every time that I woke up or jumped out of bed for a piss it was fucking freezing and I couldn't wait to get back into bed. Suffice to say that once again I stayed in bed all evening and couldn't be bothered to venture out.

I'm treating those 2 days as a warm-up for future visits (going again next week) so I should strip fitter and stay the distance.

+£177.41. I had a bit of a patchy spell mid-afternoon but then seemed to get into the groove early evening and finished the day quite well.