Non-alcoholic beer and a cardigan?


I do like to indulge in a few pints of Hoegaarden, especially in the summer months when I'm down on the coast in the search for leggy transvestites. Now one of my trading/betting colleagues recently sent me a link to a guy on YouTube that gives his opinions on various beers as he had just tried Bavaria non-alcoholic wit beer and mentioned that it tasted very similar to Hoegaarden. So I'm like 'well that sounds fucking superb' as I do like my Hoegaarden but I do tend to overindulge on occasions, invariably leading to feeling like a sack of shite the next morning!

So off I go to Google to find out where I can puchase this stuff and I see that I can pick it up from Tesco's. I jump in the motor, shoot down to my local store and find out that they no longer stock it! Bollox, so then I drive over to my local Sainsbury's and they don't have it either ... and neither do Asda's. How hard can if fucking be to get 6 bottles on non-alcoholic wit beer! I checked again and it seems that Waitrose have it (not too sure whether they have it in stock) but that means I'll have to check their store in Stratford at some point. 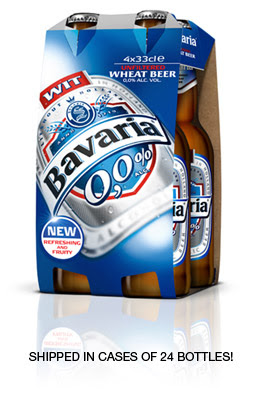 Now I'm not known for my cutting edge dress sense and I have a christening to go to over the weekend so I thought that I'd better get some new clobber. I did have a nice pair of shoes that I kept for special occasions but it seems that my eldest son has been wearing them for the last year whenever he goes out on the pull so a) he nicked them when he moved out and b) they now look like something that Steptoe would wear!

So once again I have a look about on the internet to see what all the cool trendy guys are wearing and I noticed that cardigans seem to be back in fashion! 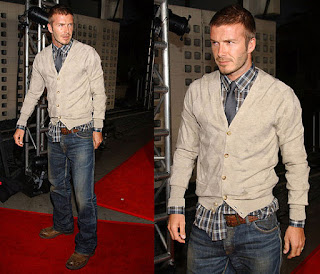 So it's off to Lakeside on Friday (or maybe Westfield) to get myself sorted and become the fanny magnet that I dream I am every night! Pictures to follow ...

+£67.41. A poor effort for a Friday really, but maybe enough for a nice cardigan?

+£30.40. Monday's are normally shite and today was no exception!

Interestingly received this in an email earlier today. Maybe Betdaq are going to make some sort of push to get some more liquidity in their markets? 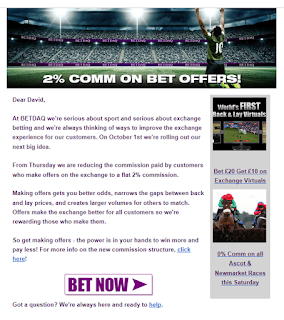 I have tried peviously to play IR on Betdaq but the liqudity is non-existant. I wonder whether or not this will make much difference? I'll take a close look over the next few days to see if there is any change.

+£548.18. So I ventured down to Stratford to get some clobber and I ended up spending 2 hours there and coming back with 6 bottles of Bavaria non-alcoholic wit beer!