There we were all snuggled up in our duvets and the heating on at full blast when kaboom ... Summer arrived! Well it won't be the first time that I've been premature, but hey it's looking bloody good weatherwise this week eh?

I just had to dig out a pic of a beer in the sun from last year ... 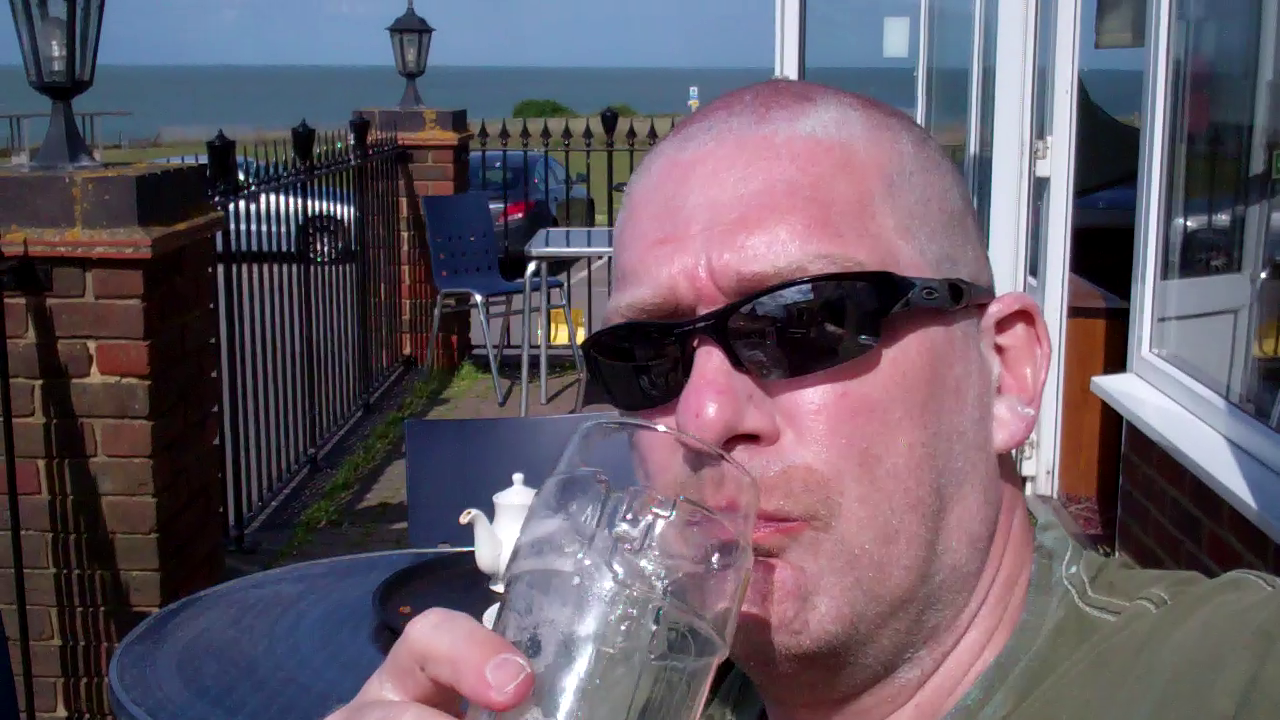 I had cycled from Whitstable along the coast and had stopped at 1 or 2 watering holes along the way. It was a fucking scorcher so I made sure to keep applying the suncream. I eventually arrved at Westgate-on-Sea (I think it's Westgate?), jumped off my bike, got an ice cold beer, applied some more cream and sat down to enjoy the sun. I got chatting to a woman sitting close by and we had a good chinwag before she finished her tea and fucked off. What I didn't realise is that I looked like this (a bright red face covered in sweat and various layers of cream) ... no wonder she legged it!

The flat season is starting to kick-in so now it's time to knuckle down and really get to grips with the form study. As mentioned previously I recored Racing Review for the ATR tracks and Racing Replay for RUK and watch the recordings. Now what I'm trying to do is spot significant runners .... early paced types, slow starters, strong travellers, weak finishers, etc. I can then make a note in my Gruss notes folder so that the next time that they run I am reminded of the running style and I can trade accordingly.

Now for this season I'm going to try and whizz through the recordings and only make salient notes as it can be hugely time consuming, especially when there are 6 or 7 meetings to watch! It's a boring task but if I want to get down on the coast as much as possible when it is sunny then I need to start earning a few quid!

+£46.46. OK from April onwards I really need to start winning more than £46 per day. To be honest I probably didn't miss any opportunities today and didn't trade in that many races, so hopefully things can only improve?

I still chat to a few of the guys that previously traded at the exchange and one guy has been emphasising the importance of greed. What he is saying is that we shouldn't forget that we're doing this for a living and to make as much cash as possible. This has a bearing on staking and probably more importantly deciding when to exit a trade. I'm finding that I'm possibly holding onto positions for a bit too long and not making the most of my trades. Over the last few days I've passed on easy £50+ greens in order to get more, only for the market to move quickly against me meaning that I have to exit with a much smaller green or in some cases a red! The easy solution is to increase my entry stake so that I can phase out this stake (and a bit more) and still leave myself open for bigger wins when trades move further in my direction. I have to remember that the volume of races increases dramatically in the Summer so that regularly taking £10, £20, £30 per race etc soon accumulates very nicely indeed!

+£241.22. Shit loads of racing today but I had one of those starts where I felt as though I was giving money away every time that I traded, losing a tenner here and there soon mounts up and before you know it you're £50 down without even trying. However, this game is all about self-control and patience and once I got into the groove the wins started to come along very nicely! The volume of racing and the associated wins reminded me of last Summer when I had some nice £300-£500+ days and those are the kinda results that I'm looking to achieve this year.

+£63.59. I'm finding that there are just some tracks that are almost impossible to play .... and Chelmsford is one of those tracks! I think that the Betfair Live picture delay is SO great that you're pissing in the wind trying to get matched and if you do get matched then you usually find yourself on the wrong side of a trade very quickly!

It was funny today that the importance of being patient was highlighted by one of the guys that I chat with during racing. He was having all sorts of problems with his PC and internet connection and was complaining that he was clicking away and couldn't get matched. I got the feeling that he wasn't too happy. However, he obviously stayed patient, fixed his internet connection and carred on as normal and finished the day well ahead! Patience is a virtue!!

-£11.26. I started off pretty poorly and then didn't really do much for the remainder of the day ...

+£15.11. I ws poncing about with lots of other stuff today and didn't really get the chance to trade that many races ...

+£7.84. I was busy doing other things yesterday and this spilled over to today so only traded 2 races!

+£255.68. I made a cracking start to the day but my effort faded in the late afternoon and Kempton in the evening was a fucking waste of time!