Yep, it's that time of year when I start thinking about the Summer and the associated hot sunny days, the plentiful amount of racing throughout the day and evening, women in short skirts and ice cold beer.

So what's the plan for April? Well my fitness regime  has really eaten into a lot of my spare time recently but I'm really enjoying it. Getting up at 06:00 is working out well as it makes me less lazy and gives me more time to enjoy the day. I'm not so in love with my current crazy low carb diet but it's a means to an end and I'm hoping to be ripped by the end of April and shredded by the end of May.

The trading follows the same pattern. I'm still enjoying it but at times it can be so frustrating and time consuming. I've recently been running into the same problem over and over again which has been costing me good money and I only found a resolution literally in the last couple of days (02/04 to be precise).

Strangely enough I just haven't misssed drinking alcohol. I suppose that it is easier to refrain during the colder months, but it's just something that you don't really want to miss out on during the Summer. I've even had a few bottles of Hoegaarden in the fridge now for quite a few weeks and I haven't really be tempted to indulge. The upside is that when I do resume I'll probably be pissed after one botttle! That's a great money saving result of losing weight and not drinking, especially as a pint of Hoegaarden was £5.10 the last time we visited The Belgian cafe in Ramsgate.

So in a nutshell by the end of April it'll be good to be in shape (somewhere around the 86.0kg mark would be nice), somewhat tanned and with a bit more money in my bank account.

+£59.81. I missed more opportunities today, not through any fault of my own, and decided that I needed to find a way of circumventing the problem that I kept experiencing over and over again.

I'm just getting pissed-off that I keep missing opportunities by a gnats cock (mostly due to the track players I believe) but I'm hopeful of a resolution which will go some way to help alleviate their advantage.

+£140.45. Ahhh finally back into 3 figure territory and it feels good. It's definitely not a co-incidence that this came shortly after my small change and I'm really hoping that I can crack on and get some nice regular profits. It also gives me a bit more motivation to keep on top of my horse notes and watch all of the replays that I record as these are definitely one of the keys to being succesful.

12:56 and I'm way behind with the updating of my horse notes (I took the opportunity of having a cuppa in the garden instead of sitting in front of the screen and staring at the Racing Post). I'll be trying to play consistently today after my relatively good day yesterday and probably erring on the side of cation in those races where my notes are not complete.

-£39.53. Well I made a balls-up early in the day by mistaking the colours and backing the wrong horse so I was immediately on the back foot. I soldiered on and only really made 2 further small mistakes which cost me about £50. I didn't experience any of the problems mentioned above so at the end of the day I was relatively happy despite the loss.

I'm very optimistic as I can see potential in the way that I am trading. Ideally I just need to slightly increase my stakes, string a few good winnning days together and get the ball rolling.


-£3.25. Sunday and my internet was degraded in the morning, so much so that I couldn't even get Gruss to connect to Betfair so I couldn't update my horse notes. I was pretty resigned to the fact that I wouldn't be able to trade and then about 15 minutes before the first race it sprang back into action. I was kind of dissapointed as I fancied an enforced day of rest but decided to crack-on. Well I shouldn't have bothered as I just couldn't get going. I had other things on my mind and I felt bored and pissed-off and it ended-up being a complete waste of an afternoon. 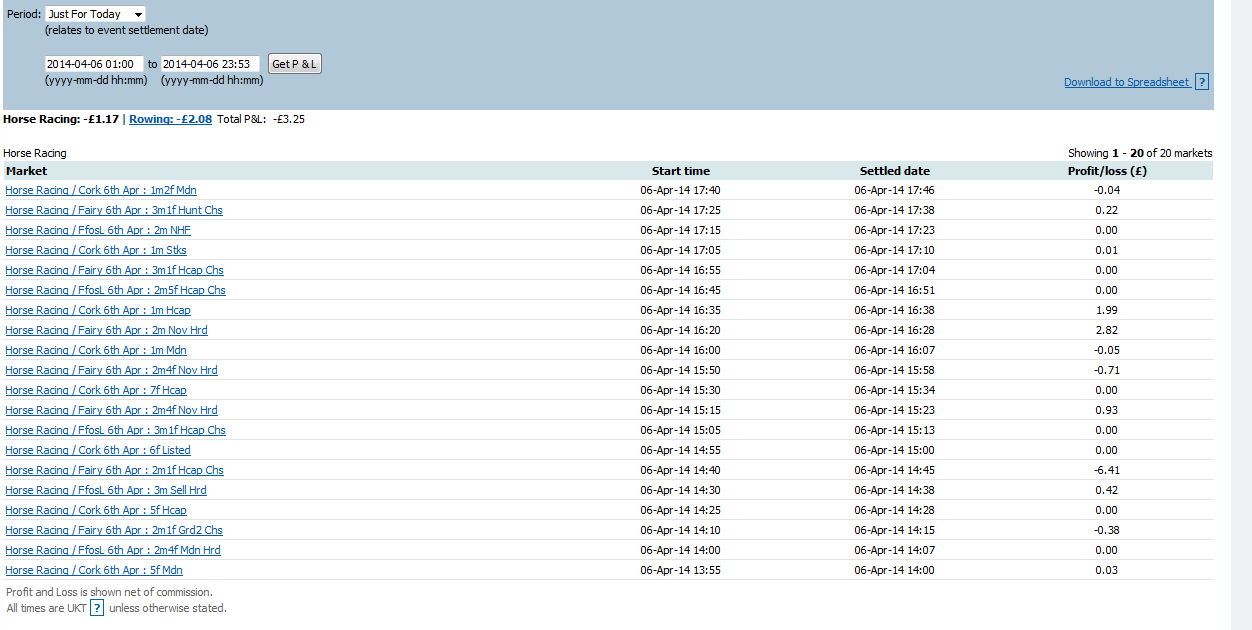 12:59 A pretty uninspiring feast of racing today and I wouldn't be surprised if it goes the same way as yesterday.

+£76.08. The day started well and then kind of fizzled out and I didn't make that much later on in the afternoon and in the evening.

+£65.58. More of a steady day today. I've said it before but I REALLY need to start pulling in more £100+ days, especially in the Summer months.