It's Time to Get Busy


It seems as though the wheels are finally in motion for my move to the coast.

My eldest daughter and her boyfriend were back with us for a couple of months in order to give them time to find a new place ..... and they move today! That free's up my spare room which in turn means that I can get cracking on the DIY/decorating. However, I might not even have to get involved as I have another estate agent coming over next week to price-up our house and that will then give us an indication of what we can afford. You never know, there may be a buyer out there who likes red/green/yellow floorboards and a matching yellow ceiling. Another option is to rent this place and rent down on the coast? My missus has also applied for a few jobs in Kent so we'll see how that pans out over the coming weeks/months. I might even be able to start concentrating properly on my pre-race trading and maybe even produce a few videos?

So November could be an interesting month and it would be so nice to record a nice score in terms of profit as this month has seen many bills landing on my desk! A good November will ease the pressure that comes in December-February as the weather always kills off many meetings.

+£99.45. A nice start to the month. I'm still quite disorganised as all of my daughters household items are stored in my living room ready for their move and obviously it's quite hard to concentrate when everyone is flying about getting things sorted and using me as a cab/removal service at the same time. 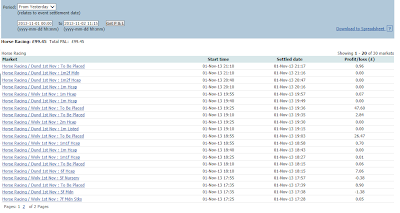 As mentioned previously most of my in-running activity is pretty much based on backing selections as opposed to laying and i think that there's still more to be had if I get a bit more involved and concentrate entirely on backing. I'll also make sure that my horse notes are up-to-date every day as knowing a horses usual running style provides a usable edge for in-running trading/backing/laying.

+£16.23. Today I was used as a removal man/cab driver for my daughter and her partner so really didn't get the chance to get stuck-in .... hence the low profit.

And just to add some balance to the lovely serene video of Ramsgate above I thought I'd add a little example of the sort of pillocks (who look as though they couldn't punch their way out of a paper bag) that you get everywhere these days .... even outside 'The Belgian Cafe', my favourite datyime and late night drinking establishment when I'm down there ...

+£127.86. There were 1 or 2 chances in-running today and I managed to get into 3 figure profit territory, so not too bad for a Sunday. 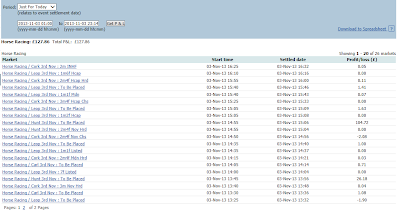 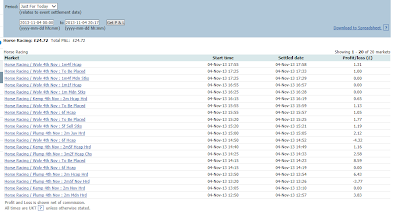 Pants racing again tomorrow so it'll probably be more of the same ...

+£34.07. Had the estate agent around today and he seems to think that we'll get a decent enough price on the house even in it's current state, so that's good news. Just a case of the missus finding a job or me making twice as much and moving over to Ladbrokes and only paying 5% commission when their exchange finally goes live. 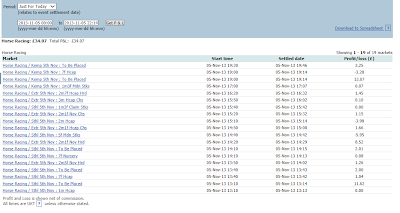 +£31.30. A while ago (probably after a few Hoegaardens) I thought about writing a book that would basically give youngsters a guide to life. There's no doubt at all that at some point in our life's we have all said 'if i knew then what I know now' etc. So I've finally decided to put pen to paper and start scribbling away. There's also no doubt that, if in hindsight, we'd all made the right choices when we were young then we would all be multi-millionaires. Strong words I hear you say .... but remember that I'm 51 and as an example one of my mates was shrewd enough to buy a few properties for £50k 'ish each back in the days that are probably now each worth £400k+. Also a certain Simon Jordan was a new starter on my shift when I was shift leader back in the IT days. In fact I'm actually mentioned in Simon's book 'Be Careful What you Wish For'. In truth the guy was probably one of the funniest and quick witted fuckers that I have ever known. Simon wasn't as orange back then and it wouldn't have been a shock to see him on TV as a professional stand-up comedian but fuck me was it a shock when we saw he was worth £70 million plus!

PS  'And I mistoook my scruffy boss, Dave Beerman, for a cleaner' .... I'll see you at The Old Bailey Simon my old friend! 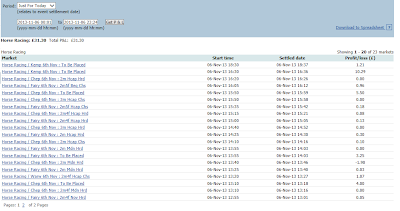 PPS If you have any salient points that you think should be added into my book then feel free to fire them in my direction!

+£36.24. I seem to be meandering along right now. OK, I've strung a few winning days together but I'm not exactly raking in the cash. 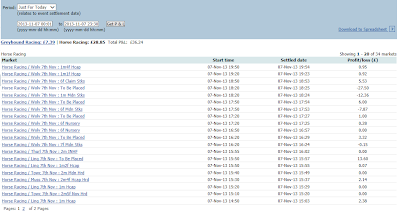 +£33.65. Another day of mediocre trading. Only had one loss which was 1p but once again didn't really get involved and hence the meagre profit. 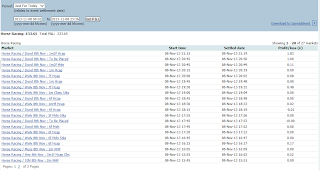 +£0.57. Saturday today but hardly got involved. 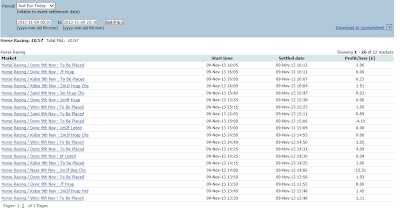 The missus treated me to a night out and we wandered off for a couple of beers and a curry ... she's a diamond (although sometimes she can be a right pain in the ass) and I love her lots.

+£29.05. Time to get busy eh? Well I've done anything but get busy! I think that last week I was the laziest fucker in the UK ... I didn't do a thing apart from lay in bed each morning.

I really need to get my act together and start making an effort ...

Today the racing was fucking awful .... you just forget how nice it is in the summer with wall-to-wall racing. As I mentioned earlier it's a case of knuckling down and trying to survive the winter months.

But hey, does all that really matter? 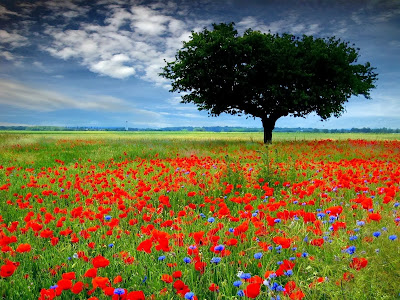 +£45.13. Haven't picked up the guitar for a while so got it out, put on a backing track and had a quick jam. OK I'm still a novice but it don't sound too bad for a quick impromptu strum ...


Felt as though I'd won a bit more than what I did today but could obviously do with a few 3 figure days of profit to keep from going skint. 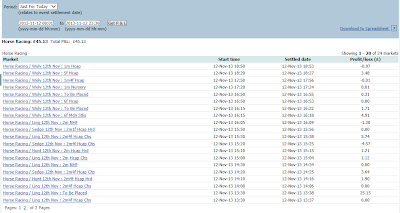 +£50.84. The thing about doing this full-time trading from home is that it's so fucking easy to lose track of the days (probably something to do with old age as well). So I'm updating this post 2 days after the event and I can't remember anything about today's trading so it couldn't have been that exciting. 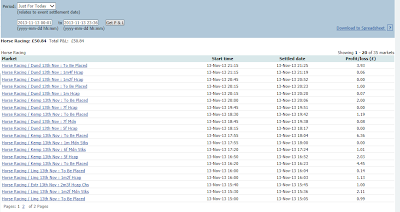 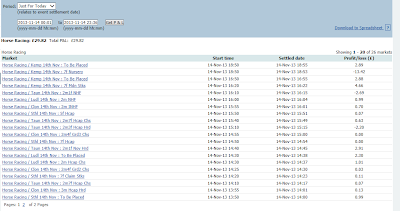 So I thought I'd have a little tinkle on the ivories ... however the fingers had a mind of their own and there was a distinct time delay between what I was asking my fingers to do as opposed to when they finally did it!

+£104.60. Had quite a steady day today and finally managed to get into 3 figure territory. 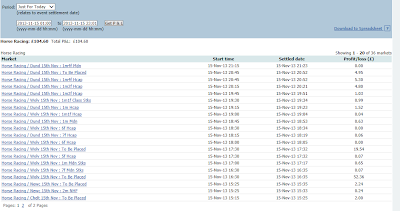 +£76.28. A long Saturday of steady, if somewhat unspectacular trading. 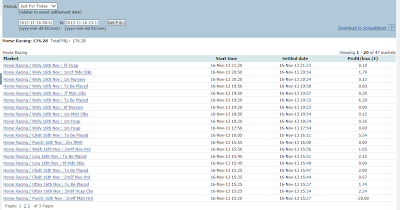 +£65.21. Leicester, Plumpton and Wolverhampton tomorrow = a steaming pile of horse dung! Quite possibly one of the crappiest Monday cards this year. 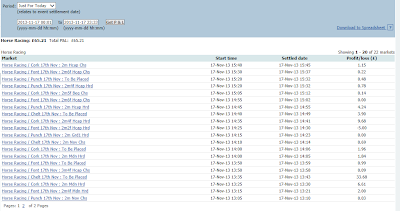 +£39.40. Another steady day for the time of the year. I did get lucky in one race at Wolves where I backed a bit too early for £100+ at small odds coming off the final bend and the fucker almost got caught on the line! 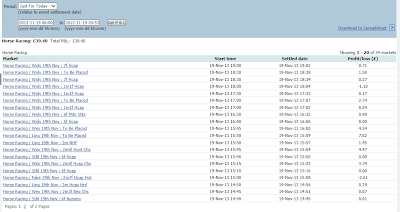 +£26.69. The struggle continues. There's no doubt in my mind that in these days of weak markets there is a lot of manipulation taking place, and unless you can suss out what the fuck they are doing then it's fucking hard to make a decent profit. Additionally the in-running liquidity must surely be at an all time low? To be honest I can't see much hope on the immediate horizon. OK the Ladbrokes exchange may help, but strangely the BF share price is quite solid. If the Ladddies exchange was going to be a serious threat to BF then shouldn't the BF share price be a bit wobbly? 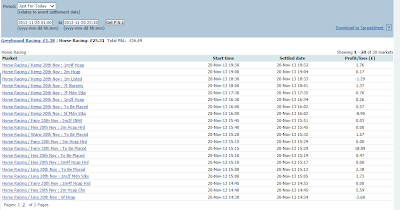 +£130.20. My guttering has been dripping (oo errr missus) so I called a few roofers to have a look and give me a quote. Well only one guy actually turned up and he must have thought that I was a fucking idiot, quoting me £850 for one days work!! So I said 'bollox to that' and I've hired an access tower for a week and that should arrive tomorrow (and won enough today to pay for it). So up I'll go and splash a bit of paint while I'm up there.


OK, Sarah Beeny, she's not a builder or even a roofer but she's got huge tits and that's a good enough excuse for a pic .... 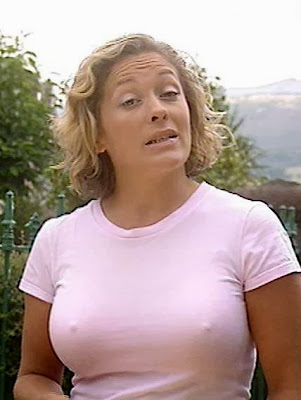 Another average day today and then got lucky in the penultimate race at Kempton where there were two runners in orange and I managed to lay the one falling out the back of the telly. Sometimes it goes for you, and sometimes I'm the one who makes the fuck-up and someone else steals my cash! 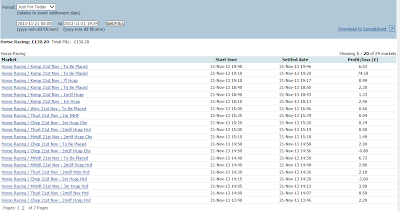 +£17.21. What a fucking hopeless day! Will probably just settle for the evening racing at Wolves tomorrow and crack-on with my gutter and painting. I just can't face another day of shite racing with small fields and sitting here all day and winning peanuts ... 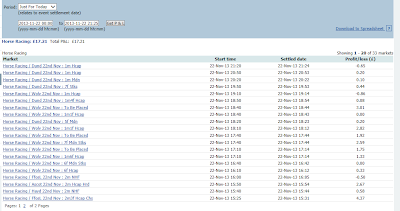 +£0.43. Thought that I was heading for my first daily loss in November but just about made it into profit after the last race ... 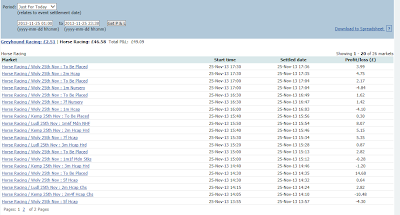 Didn't bother trading yesterday as I spent most of the day up the scaffold. Managed to get my gutter and flashing sorted (hopefully, will know when it next pisses down).

'This is fucking bollox! Every time I press the fucking button this cunt of a market goes in the other direction ... every fucking time!!! Fucking piece of shit!! This is fucking hopeless why am I even fucking bothering ... BOLLOX!!'

... or something along those lines. 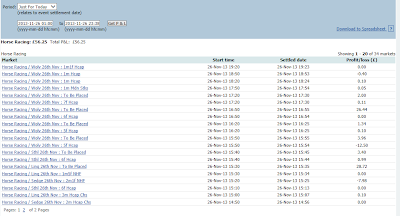