Well Wasn't That a Lovely Summer!


Well that was a fantastic summer in regards of the weather! I spent plenty of time down on the coast generally enjoying myself, cycling, sitting in the sun and getting pissed! I had the chance to visit a few new pubs along the way and I have to say that it was a very enjoyable experience. However, that's all behind us and now it's time to settle in for the hard winter graft.

There were 141 meetings during September and it looks like about 120 scheduled for October, so that's about a 15% reduction in the number of opportunities. From memory the summer months max out at around 180 meetings per month, so we have approximately 30% less meetings per month in the winter, and sometimes even less when we get cancellations due to adverse weather ... blimey we're all DOOMED! 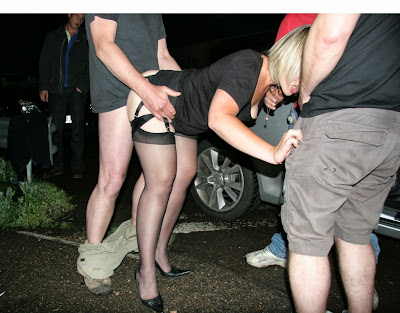 I normally do play all of the evening horse racing during the summer so instead of the horses I'll just switch to trading the dogs in the evening. The dogs are televised on Thu-Sun evenings where they show 2 meetings per night on RPGTV (channel 212). I'll also have a crack at the early morning dogs and see how that goes.

There's plenty of opportunities to be had over the jumps so I'll be updating my abbreviated horse notes which I keep stored on Gruss. These are invaluable and help in winning a few quid.

Anyway, let's crack-on in October and see what happens!

PS The diet is going OK but I really need to make a push in October to get down to maybe 90kg before the hard work starts in Nov/Dec and Jan!

+£119.18. A pretty good start to the month considering the amount and standard of racing today. Did OK during the day but got fuck-all at Kempton in the evening. However I was happy that I got over £10 on the dogs and if I can keep that going and maybe increase it a bit that'll get me a few quid on the month.

+£42.25. Pretty much nothing of interest happened today. Scraped a few quid from the dogs and I'll be pretty dissapointed if I don't get at least £300 from the dogs this month. I think that my understanding of the horse pre-race markets is gradually improving and maybe I need to be a bit more aggressive when I spot potential moves. We'll see ....

PS My diet is starting to kick-in and as I sit here typing this I'm FUCKING STARVING! I'll update my 'Body Transformation' blog when I hit 95kg ... which might be tomorrow if I avoid the biscuits on top of the freezer!.

-£98.09. Started the day in a bad mood (no guesses for who put me in a bad mood). Upped my stakes in the morning dog racing and had a fucking nightmare. Instead of trading aggressively I suppose that I traded wildly. Just goes to show how your mood affects your trading.

I then continued my shite form into the afternoon so as to complete a fucking nightmare of a day. Managed to set light to £160 in one race in Ireland after which I had to go and stand in my garden before I fucking exploded! However this balls-up kind of stung me into action and I had a few good pre-race trades so there was some positives that came from the day.

I've finally realised that I'm sick and tired of poncing about, therefore I'm going to start crashing in, so expect a few days of £200+ intermingled with the odd three figure loss day.

+£22.74. Seemed to be running in treacle today and felt quite frustrated at the end of the afternoon. However, my pre-race game is really coming together and I'm feeling more and more comfortable when I'm trading. I'm beginning to get quite efficient at recognising good entry points and when to sit tight and when to exit quickly. It's Saturday tomorrow so maybe I can up my stakes a little and be a bit more aggressive, although having said that I find Saturday's to be busy in-running days so I might have to wait until Sunday before I have a good crack. 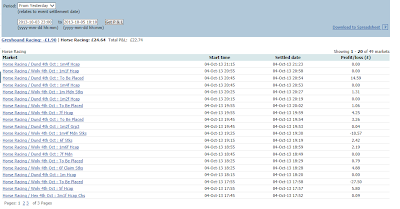 -£16.34. Fucking pants today! Won pennies during the day and didn't really get the chance to do much pre-race trading. Knocked-out my meagre winnings backing a donkey at Wolves and then had a mini-meltdown and managed to turn a small green on the dogs into a bigger loss when it went in-running, entirely my fault, and the 6.0 shot that carried my red sprang out of trap one in a handicap and led all the way! (without that mistake I would have won around a pony on the dogs so that gives me some hope).

Tried pre-race at Wolverhampton but the markets were all over the place and I probably didn't use the right strategy so found them hard and frustrating. In fact I was so angry that I put on the gloves and smashed the fuck out of my heavy bag, even though it's not hanging. I just sat on a stool and punched! It's a professional 'Ringside' fully leather bad that weighs almost 50kg so it takes a pasting! PS The bag won ... 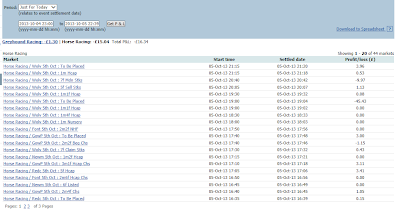 I've always known that I tend to prefer entering the market with a lay bet as my first trade. I've tried hard to rectify this but I'm still predominately looking to catch a move on a drifter as opposed to a horse that is shortening in the market. The one problem with entering the market with a lay trade is that your exposure is higher than if you had entered with a back trade, asssuming we're talking about odds of 2.0 and greater. It also restricts the full usage of your bank. For example, if your bank size is £100 then you can only enter a lay of £50 on a horse trading at 3.0. However you can enter a back of the full £100 if you think that the price is going down. Obviously you have to be careful in this situation as if the price moves against you then you will find yourself unable to take an equal red as you don't have enough funds the cover the relevant lay bet. It can also be unnerving if you lay first as your exposure could be quite high, and this is the time you don't want BF to crash, your PC to switch itself off or your internet to fail! So over the next few weeks I'll be looking to identify horses that are shortening as opposed to drifting and also going through some old market recordings to make sure that the signals that I look for in trying to predict a drifter are the same as spotting those about to, or in the processs, of shortening.

+£21.76. Although I've been trying to master this pre-race trading on and off for about a year now I find that I'm always learning ... and that's a good thing. On one of my posts above I mentioned that I was going to concentrate more on identifying swing trades or big moves, which initially seemed to be going well, until today. I don't know if it was just me, but the markets seemed totally random today, with prices jumping all over the place. The thing is I only realised that I had to adopt my style to these type of markets late on in the day, so I spent the first two hours poncing about looking for swing trades and not even realising that most of the markets seemed to be flying about within a broad range of 5 or 6 ticks or so, well that's what it seemed like to my novice eye.

I managed to capture a screenshot from the 16:35 at Uttoxeter (see below). This was one of the more sane races, but even so, take a look at the market overview graph! 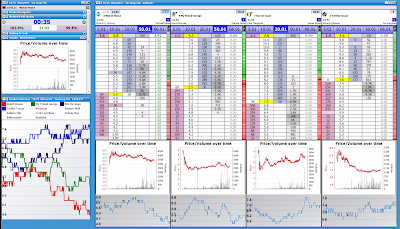 I'm nothing but persistent, so I'm going to have a crack at the dogs tonight with my main aim of staying out of trouble and not going in-running! 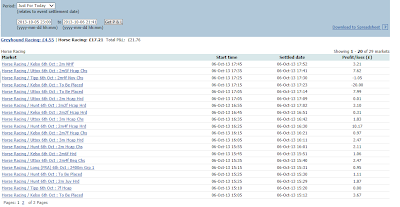 +£38.25. A fairly typical Monday with very few races. The 'Bomber' seems to have re-surfaced which can cause havoc in the market, but get him right and there's money to be made! 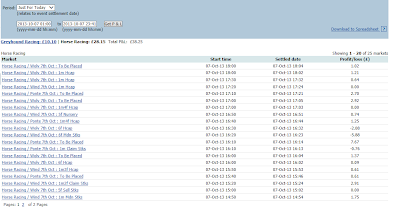