Well it's been almost a year since I decided to venture into the murky waters of pre-race trading and to be honest things haven't quite developed as I expected. I've attended most of the TFF webinars and watched hundreds of recordings of previous pre-race markets but I'm still struggling to get that consistency, and consistency is the key in any type of trading.


So, what are the reasons why I haven't yet cracked this pre-race game? Well the good thing is that I know what they are:


I'd like to think that I have most of these points covered, whereas in the early days I'd trade every race in a very similar style. No wonder I nearly always lost!


I still occasionally fall fail of this point. I think that there is a thin line between successfully getting onboard a perceived move 4 or 5 minutes before the off and riding the profit, or getting on only to find a reversal as soon as the 'real' cash appears. It all comes down to timing. It's frustrating when you miss a nice gradual move, but it's even more frustrating when you join a steady move and it suddenly goes against you and you find that you entered very close to the low or high of the range. I suppose the answer is to quickly take the red when this happens.


When I have a trade that puts me in the green zone then I tend to phase-out my position. For instance, if I have backed for £50 at 3.5 then I exit by maybe putting lays for £5 at 3.45, 3.4, 3.35, etc. This is a good policy and although it extends your green zone it also negates some of your profit if the trade moves further than expected in your direction. I need to work on this and not stick to a rigid exit policy.


I think that this is the area where I could greatly improve my pre-race results. I tend to use similar stakes each race, so I really need to commit a bit more cash when I have a stronger feeling for a move.


I tend to play a more cautious game when I trade IR and I think that I need to adopt a cautious yet aggressive policy in my pre-race game.

I need to focus on being more selective with my entry points and when I do sense a good opportunity be prepared to commit more cash and scale my exit points more effectively .... and take a quick RED if the market doesn't move as expected!


Let's see how this goes and I'll report back and post some recordings. I wanted to put a daily recording in this blog but to be honest the first few recordings that I captured were pretty basic and boring. However, if I follow the above policy then I should be able to capture some more interesting action.


PS Caan over at Trading a Profit has published a pre-race guide and although I haven't seen it as yet I would expect that it's probably worth the cash if you're looking to get seriously involved in the pre-race game.


Anyway, on to the more serious stuff ...


A pint or maybe 2 of Oranjeboom outside The Hampton Inn @ Herne Bay. 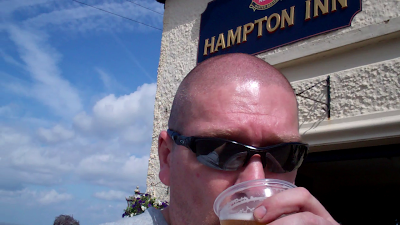 +£182.20. Good day today, especially for a Sunday. Followed my rules, as above, and had 2 good pre-race trade races where I traded well and was relatively happy. The profits weren't anything spectacular, but these will come in time with increased confidence.

So off to a cheap B&B for a couple of days and enjoy the last of the Summer weather and indulge in a few more beers!

Here's one I drank earlier in the year ...


A pint of Fosters (it's all they had!) outside The Swan @ Westgate. 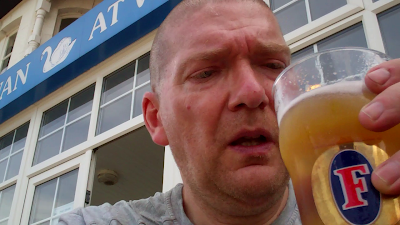 +£67.95. Had another nice couple of days down on the coast. Decided to do a bit of nightime cycling on Tuesday morning after a few sherberts and it was interesting cycling along in the pitch black on my way to Deal. Arrived there at about 05:00 and it was a glorious morning just sitting by the beach as the tide lapped against the shore. Unfortuntaely I had to cycle all the way back to Ramsgate and ended-up completely knackered and with a sore ass (I knew I shouldn't have stopped off at that dogging site!). Got back to Ramsgate just after opening time, 07:00, but couldn't face another beer so had a fry-up and a cuppa then retreated off to bed. Ventured out again around lunchtime and the weather was nice but I felt fucked sitting in the sun trying to recover from my excessive night of drinking/cycling. Had a cracking couple of days though so now I really do need to hit the diet again and my weight has ballooned out of control and I generally feel like a sack of shite.

So it looks as though after a night of drinking that I was the last man standing in the whole of Ramsgate! This was somewhere around 02:00 if I remember correctly and everyone else was tucked up in bed. 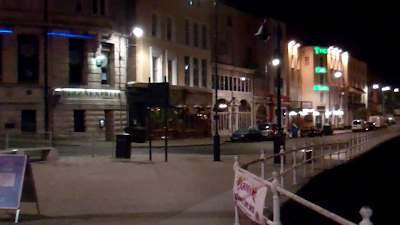 +£158.71. Felt as though the my body was almost alcohol free today and therefore didn't do too bad. A nice steady day which goes some way to covering my recent beer expenses.

Getting stuck into a pint of Carling outside The Enigma @ Rochester during The Sweeps Festival. 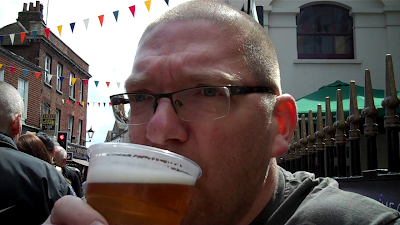 -£7.71. Only managed to trade a few races today and managed to lose my meagre winnings on my penultimate trade!

Outside The Bohemian @ Deal. Unfortunately it was 05:00 so I had absolutely no chance of getting a beer! 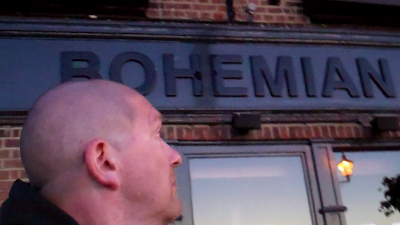 +£128.62. A busy Saturday today. Started well and then went back to zero ... felt fucked-off but stayed calm and chipped away and ended up with another £100+ day.

A pint of Carling in Charlottes Bar @ Rochester. 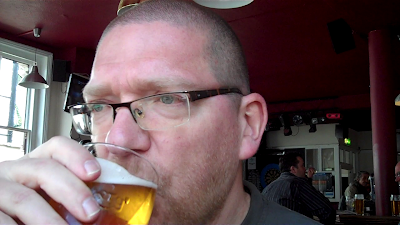 Taking a glass of Peroni on the beach @ Whitstable at around 09:30 ... note the Hoegaarden glass! 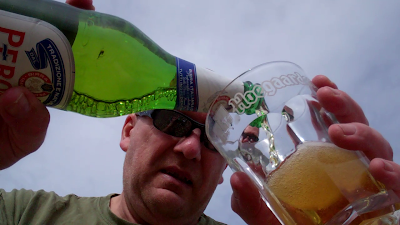 +£84.53. Another steady day with not much pre-race action as I found most of the markets tricky to read so I just concentrated on my IR and it didn't work out too bad.

The view while I was drinking my Peroni (see above). 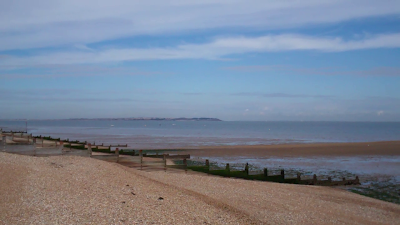 +£224.37. Squeezed in another couple of days down by the coast but now it's back to work for the Autumn and beyond!

Ooooh .... a pint of Guiness in The Crown @ Rochester. 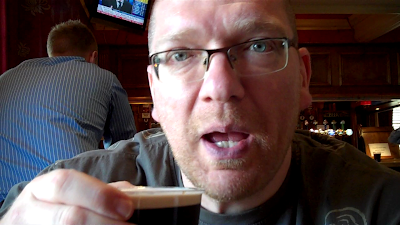 +£34.83. Never really got going today and finished early as I was off with the lads to the Electric Ballroom in Camden with the lads to celebrate my boys birthday. We all had a cracking time and didn't get home until after 04:00 which is late even by my standards!

Sampling a pint of Oranjeboom outside The Rose Inn @ Herne Bay. 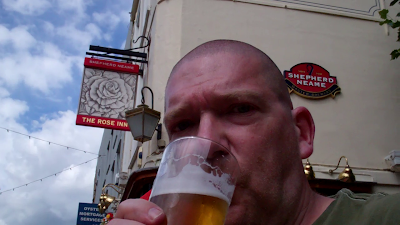 +£59.21. Fell into a bit of a defensive mindset today and missed quite a few nice bets as my cautious nature kicked-in.

Might be tempted to have one more visit to the coast next week and do some more cycling as the weather is supposed to stay nice and sunny. If I can nick a few quid tomorrow then I might shoot down there for a couple of days, although the drinking is starting to play havoc with my body and general well-being! I feel another diet coming on ....

Another Guiness ... this time in The Nags Head @ Chatham. 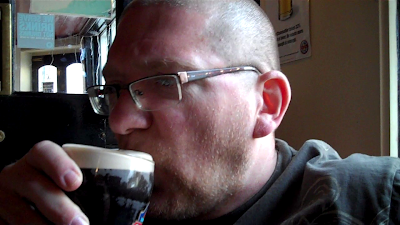 Smothered in sun cream and indulging in a pint of Fosters outside The Fayreness Inn @ Broadstairs. 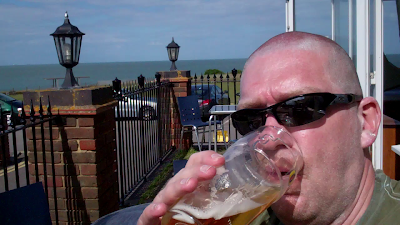 Getting stuck into another pint of Peroni outside The Roma @ Ramsgate. 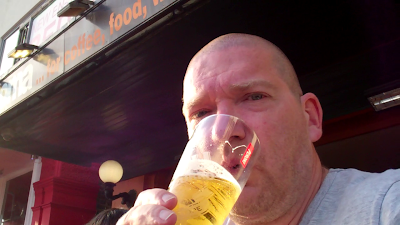 +£58.88. Back from another few days at the coast. Felt tired as usual so was happy with any kind of profit.

And once again I'm the last man standing in the centre of Ramsgate in the early hours of the morning! 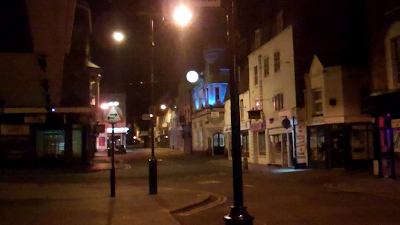 +£81.35. A steady day for a Saturday. As usual should have made more but it just didn't happen.

So ended August with 6 days of £100+ profit and only 2 small losing day. I did take quite a few days off to drink and be merry but I think that it's back to the autumn/winter grind with the evening racing about to finish.

This is the time of year when back in 2012 it all started going tits-up .... so let's see how it goes in September.