Well, as you can see I've been cultivating the mother of all beards on my boat for the last few weeks. I reckon it's a sign of masculinity and virility, but my missus hates it and one of the guys in the gym recently remarked 'what the fuck is happening with your face!'. I've been determined to grow it as big as possible, but over the last few days it's become a right pain in the ass. It's like having a huge ball of velcro on your face, and everything that comes near it gets snagged. I met a very nice young lady last Saturday night, long legs, big tits and a gorgeous boat. Unfortunately she had the hairiest minge this side of the Thames ... you can guess the rest. I had to call the Fire Brigade at 2 in the morning to get us seperated!

Anyway, here it is at it's peak: 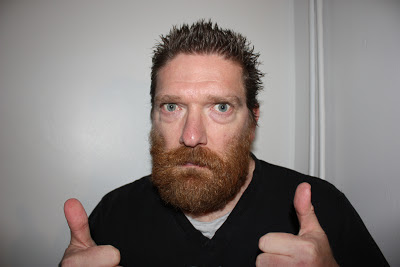 What a handsome bastard ... no wonder I pulled on Saturday night!

And after a bit of beard sculpting ala Edward Scissorhands it became this: 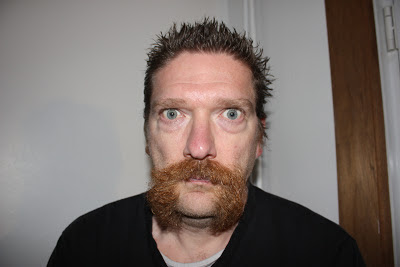 Then I thought 'fuck it', let's try a moustache: 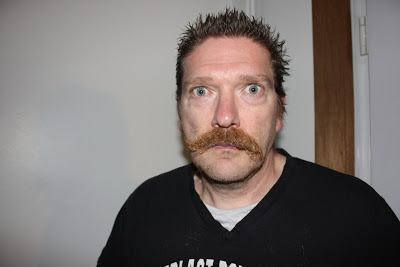 And then I chopped it all off .... was a great laugh while it lasted.

So well it's November already eh? I've been playing from home today using BF live video and pre-race trading where I can, and I think that my decision making in the pre-race markets is already improving. I've chopped down on my stakes drastically. My pre-race stakes are £11 a click, just while I'm learning the game, and my IR stakes are down to £10 a click. By lowering my IR stakes to this level I can play a lot earlier and not risk doing my bollox during the next few days while I make sure that the BF live pics and internet speed are OK.

I've noticed a few things today that could throw up nice opportunities over the next few days/weeks so I'll be keeping an eye on these to see how they progress.

November 02
Well I was quite happy with yesterday's trading. OK it was a long day, but I choked down on the stakes and still made a few quid and enjoyed myself along the way. Playing from home is a bit different from working in an office like environment. I can make a cuppa, rustle up something to eat, or do the washing-up and have a tidy around. However, I also got interrupted quite a bit by phone calls, knocks on the door, and even by my missus asking where the fucking iron was right in the middle of a race! Do I look like I use a fucking iron?
Anyway, I has a poor start to today as I was playing a little more carefree and got caught by a couple early doors, albeit for small stakes. I became more focused on the job at hand as the day progressed and once again ended up with a small profit.
I did manage to pre-race trade a few races, and here are my thoughts:
So here's how I did today:

Novermber 04
Had a hopeless start to the day and just felt like it was going to be a shit Sunday. It's strange that now I have drastically lowered my stakes I feel really pissed-off when I lose £10. I think that I was about £50 down and had the strong urge just to lay something to get back to level. I suppose that 'chase' instinct never goes away, no matter how hard you try and control it. However, I'm quite good at staying calm and carrying on, so that's what I did and gradually got a few wins on the board, mostly small in-running gains.

November 05
Another skinny day today .... nothing much happening on the trading front. I did however take part in the 'Trading for Freedom' webinar in the evening. Jack and Caan were online and analyzed one of the races that Caan had traded at Newmarket. It was really interesting listening to the guys as they explained how the market was moving and the reasons for entering trades.

November 07
Felt as though I was getting back up to speed today. Didn't make a lot of profit but traded 23 races with only 1 loss, so I feel like I'm slowly beginning to get to grips with the pre-race game.

November 08
Cracked on again today and finally won a few quid instead of the relatively small amounts that I've been getting of late.

November 09
Already had to fuck about this morning going to the bank, post office, chemist, etc. If you're driving then it takes fucking ages to get parked anywhere these days. We're becoming a nation governed by zillions of rules. Next time you go out for a drive take a look at how many fucking signs there are everywhere, most of them telling you what you cannot do, don't turn left, don't park here, go straight ahead, fuck off out of the bus lane even if it means that you block the traffic coming the other way etc. And there's probably some little spotty twat sitting on the other end of all these cameras waiting to send you an £80 fine if you fart too loudly. Bollox the lot of it!! So I'm already a bit knackered and it's only 11:23, so I'll have to play carefully today.
... well I should have played carefully, but .... dropped a bollock late on at Wolves when I thought something was holding on for 3rd when it was actually only holding on for 4th .... DOH! This type of balls-up has happened to me in the past when I've been tired. Not matter how hard you try it's just not wise to try and play when you feel knackered. Got a bit back later on and I'm only really aiming to get around £1500 this month, as it's my first month playing from home, so that shouldn't be a problem.

November 10 - 96.0kg
Jumped on the spinning bike for 20 minutes this morning as I'm turning into a real fat bastard. Aiming to get down to below 93.0kg by the end of November.

November 12
Had a fucking hopeless effort at IR today and actually laid 3 winners in the fucking place market!! Fucking useless!! However, my pre-race trading seems to be improving, so that may keep me from going skint!

November 13
Bounced back today with a few small wins. Adjusted my Gruss IR stakes down to £55 per click as they're a bit out of sync with my pre-race stakes and it's a bummer if you nick a few small wins pre-race to then go and blow it with one click IR.

November 14
Had a mixture of babysitting and laying some block paving this morning! Ended up darting in and out of the garden between races to check my cement, so the day was a bit dis-organised to say the least. Nibbled a few more quid, so will now have to start to become a bit more aggressive to ramp up the winnings back to a normal level.

November 15
Decided that I had to get back down to the gym today as once again I'm becoming a fat bastard. Got myself ready only to find that I had a flat battery! I was all set for action, so I just jumped on the bike and cycled. The weather was quite crisp so had a nice 20 minute or so ride then beat the shite out of the bag in the gym. Missed a few of the early races and didn't get to see any of the Irish racing because of the overlaps. Nicked a few quid ...

November 16
Really enjoyed playing today as I felt that I was making good progress with my pre-race trading, although I lost maybe £30 I felt as though my analysis was improving, and where I made mistakes I knew exactly what I had done wrong. I'm pretty confident that I can start to make it pay over the next few weeks.