It's Time to Win Some Cash


It's coming to that time of the year when the volume of racing increases significantly and therefore we have many more opportunities to make some cash. 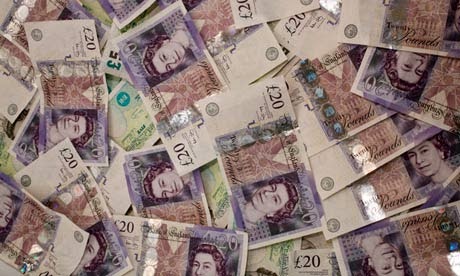 I remember a few months back that I was quite surprised when I took a look at a P&L screenshot posted by Caan over on his blog. When I glanced at his daily profit, which was maybe £300+, the figures just didn't seem to add up, as all I could see were wins of anywhere between maybe £5 and £25 per race. However, when I took the time to look properly then I noticed that these relatively small to medium sized wins per race in fact added-up very nicely. I then remembered that I had also experienced the same phenomenum a few years back when I traded in the exchange. Some days seemed quite slow with no notable wins, but then at the end of the day you would suddenly realise that you won £200+. This was all down to the way that I played BF back in those days. I was predominately a layer late on in races and would often only have 2 or 3 main bets per day. These would win/lose me in the region of anywhere between £100-£500 'ish. So in a nutshell I would have far fewer bets/trades with much higher potential profits and losses. 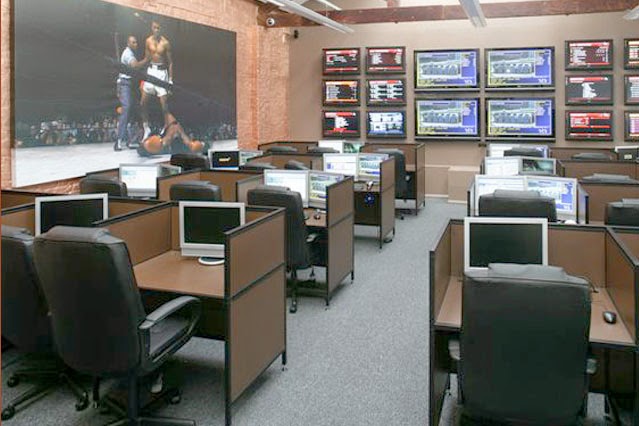 Fast forward to the present day and I find that I've only recently realised that regular, albeit smaller, profits are the way to go (as proved by the Caan example above). So all of this rambling has led me to mention the fact that with so many more races during the Summer months I can afford to jump in and out of the markets, effectively being more active, and taking £5 here and there can be quite profitable. Referring back to Caan, I noticed that last April I think that he averaged just over £10 per race. Now initially this maybe doesn't seem a great amount .... but he traded over 650 races during the month. As they say in the USA, you do the math!

+£154.04. Saturday eh? Not usually one of my best days but it didn't work out too badly today. I felt confident and played slightly bigger in 1 or 2 races, although I am still way short of what I should be wagering.

I've said it many times before, but I'd really like to kick on now and start earning some decent cash, So watch this space ....

+£53.87. I tried to push on today and was relatively happy with the result. However, that is the problem. I shouldn't be happy winning just £50 per day when there is the potential to win several hundred per day, especially in the Summer months. So come on Dave, get your arse in gear!!


+£100.01. It's no co-incidence that once the racing picks-up midweek then it becomes a lot easier to win some cash. As mentioned previously on a busy day like today it's more than OK to win a few quid here and there as it all mounts up ...

+£129.73. Another 3 figure day which is a nice respite from those mind-numbing, boring days where the racing is shite and the profits are low.

+£19.15. I thought that the thieving mongrel track players and the guys paying for the SIS codes might have a day off today as there were only 2 meetings ... but obviously not, so it was the usual beating my head against the wall scenario realising that some fuckers keep beating me to the punch.

Then again I suppose that it's marginally better than having no meetings as I didn't have anything else planned .... it's just gym, horse notes, diet, trade and then train again for me at the moment. My weight is down to sub 88.0kg and I'm starting to get defined, so hopefully another 6 or 7 weeks and I should be richer, ripped and ready to hit the coast for a bit of cycling and fucking huge amounts of beer. I might even have a few sunbed sessions over the next few weeks in order to get a bit of colour into my chalky white body?

+£149.45. Quite a bit of good racing today and another 3 figure profit. I really need to try and kick-on and make this kind of result a more common occcurence. 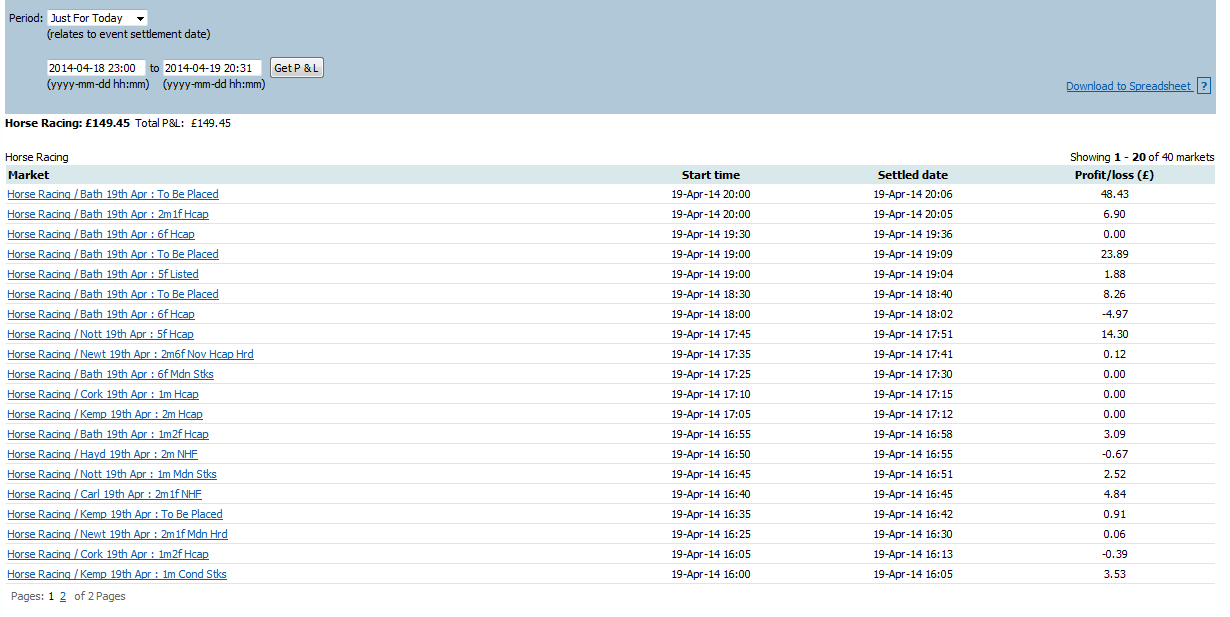 +£42.97. Fucking loads of runners today and it took me ages to update my horse notes. The meetings flowed quite smoothly apart from those fucking Scottish idiots at Musselburgh who couldn't wait a few seconds each race for the preceeding Irish race to finish. I hope that they vote YES and fuck right off! That REALLY gets on my tits and causes me to swear and shout a lot.

Anyway, I can't say that I really missed any opportunities today so I just seemed to trundle along picking up a few quid here and there, which is quite typical for a Sunday.

PS Fuck me!! I've just noticed that there are 9 daytime meetings tomorrow!! That'll take me about 3 days to update my notes and I envisage lots of shouting and swearing when the races overlap ...

The number of meetings per day is now on the increase so this is the time of the year to get stuck in and win some cash. Unfortunately the track players and the SIS code merchants have the game by the bollox. Today I found it almost impossible to get matched in-running, so it might be a long, hard, frustrating and frugal summer.

+£43.91. Started the day poorly and then just chipped away for a mediocre profit.

+£88.57. I was coasting along and into 3 figure profit territory and then made a mistake and lost £55 which made me realise that I was getting a bit tired and losing my concentration. So although it wasn't a bad effort I was still a bit pissed off.

+£58.11. A steady day but I got caught in one race where the odds went against me SO quickly that I couldn't even get my stake out. This was pretty much the first time that this has happened and it was quite a shock as the odds flew against me big style.

-£9.32. Ascot on ATR was unplayable and I didn't fancy Punchestown or the hunter chase shite at Cheltenham so I found that my concentration was really poor. I missed the start of quite a few races where I was busy washing, tidying or making cups of tea and generally found the day to be pretty boring, and hence the small loss.

I'm off to the coast for a couple of days with the plan of smashing into it upon my return ...