Yep Summer has arrived with a bang. Had a cracking weekend down the coast and now back to the daily grind.

+£4.25. Played like a complete wanker today and felt completely fucked off. Felt tired and miserable after having to get up early and run errands for family members. As mentioned before if you're ever tired or just fucked-off from poncing about and getting grief from your wife, daughters, sons, etc then you're almost certainly going to do your bollox. I've seen this happen several times before, both to myself and colleagues when they're trying to trade but they are either tired or their mind is elsewhere dealing with family issues and all of the bollox that goes with it.

+£70.08. Upped the stakes today and played purely IR Was quite aggressive as I still felt fucked-off by certain family members and came close to doing my bollox once or twice, but at least I posted a better score than some of my previous efforts so far this month.

Really need to get back to the coast so going to play aggressive again tomorrow and try and win enough cash to cover me for the next few days.

+£25.69. Another slow and frustrating day. Hardly played any pre-race as it seemed all over the place and the standard of the fields were generally shite.

Might have a go on the DAQ tomorrow pre-race for small stakes and see how it goes.

+£39.03. Struggled to make any real headway all day and had to settle for a meagre profit.

Traded 6 early races on the DAQ for small stakes. I used my Geeks Toy BF chart and 180 second chart underneath the Geeks Toy Betdaq ladder and this seemed to work OK.

Back to the coast on the weekend to make the most of the sunny weather so could really do with a decent day tomorrow.

+£43.30. Felt quite confident in the pre-race markets until the evening meetings started then it all became a bit haphazard as the markets were jumping about like crazy. I suppose that once you notice this then you have to alter your game plan accordingly.

I'll endeavour to take a few recordings and I'll post a daily recording from now until the end of July.

+£58.31. Really tried to press on today and get another 3 figure profit on board, however I didn't really get any juicy trades and finished on just over £50. Saturday tomorrow so will have another bash at breaking the £100 barrier.

Had a quick look at the pre-race markets on the DAQ and they looked better than ever. I will have another crack over the next few days but it's a pain trying to amalgamate the BF graphs alongside the Betdaq ladders.

This is how I have my Geeks Toy for BF setup. I have ladders for the top 4 in the betting, the market overview, the BF graph and a streaming chart showing the last 4 minutes. 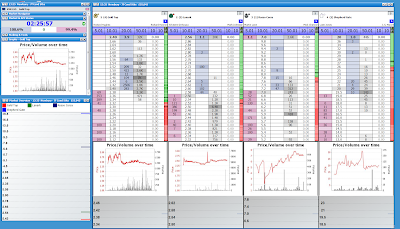 To trade effectively on the DAQ I like to see the BF graph (which you don't get on the DAQ, and the streaming chart also from BF). I have asked Betdaq several times if they can provide the same info that is provided by the BF API, such as total amount matched at each price, but they don't seem to be too keen to develop their API for some reason? 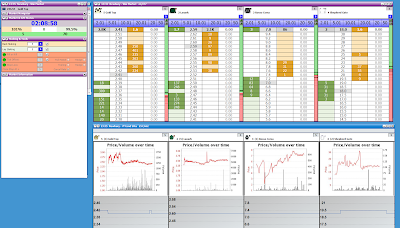 However, it's a right pain in the bum fucking about with the windows before each race, it would be so much easier if the API people at Betdaq provided this info.

I suppose that the Geek could pump the BF data into the Betdaq version of the toy, but then I suppose BF would throw a wobbly and start complaining about the use of their data?

+£113.45. Another 3 figure day, but probably down to the sheer volume of racing on offer. The pre-race markets felt superb with regards to turnover and I now realise that you really have to get stuck in and make the most of the turnover, especially on the bigger races, but my cautious nature still holds me back. However, I feel that my pre-race game is still gradually improving so I'm happy.

+£4.08. Dropped a few quid early on and then spent the rest of the afternoon chipping away just to get it back. Quite a few of the races had short-priced joint favourites and I find these quite hard to trade pre-race so chances were limited and in general the markets were completely different to yesterday. I did record a few of my pre-race trades but to be quite honest they were pretty boring, so I'll try and get a nice one for tomorrow.

+£32.58. Got caught early on by a big Tony McCoy drifter and then beavered away to get my head slightly in front.