+£9.18. Played like a novice today. Up and down like a whores drawers and ended the day winning just about enough to purchase a larger doner and chips (although I wasn't tempted to actually have one). But hey, these days do happen so it's just a case of concentrating and cracking on.


Although I've mentioned before that I don't set monetary targets I do feel that in May I should be looking to get about £3k. I won over £5k last May and although things have changed I feel that my game is gradually getting back up to speed and if I can continue to work on my pre-race game and utilise my bank a bit more effectively then I should be able to average around £100 per day. I'll keep an average daily figure on here and maybe dig out some more beer drinking pics to give me a bit of motivation along the way!

Anyway ..... lets talk about beer. August 17th 2012 was a fucking scorcher! I cycled from Ramsgate along the coast via Broadstairs and Margate and finally arrived at Minnis Bay. After a few refreshments I cycled back to Ramsgate using a pre-planned shortcut which turned into the journey from Hell as somewhere along the way I took the wrong turning and ended-up cycling along in the blistering heat for miles and miles. When I finally landed back in Ramsgate I was well fucked. Fortunately I found my way to 'The Horse & Groom' where I quenched my parched throat with an ice cold Oranjeboom. However, what I didn't realise is that on my journey back I had picked-up an assortment of dead insects on my sweaty head! Was wondering why I got some strange looks as I ordered my beer ..... 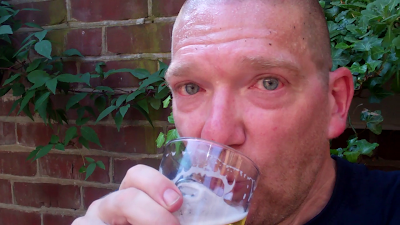 +£20.57 & Daily Average = +£45.10. Struggled to make any headway today. Chipped away and then knocked it all out and repeated this process a few times. Ended the day pretty fucked-off but these sort of days are part of the game so can't get too disillusioned.

+£84.85 & Daily Average = +£55.04. Didn't set any records today but felt as though I was really on top of my pre-race trading so I''m quite happy. I'm reading the markets much more efectively and this has increased my confidence. I'll probably do a video update tomorrow and explain how I now approach the markets.

+£42.58. Didn't play the whole day today and missed quite a few races. Actually as you can see I only played in 13 races.

+£23.88 & Daily Average = +£47.76. Ultra busy bank Holiday Monday today with zillions of races. The races were all so compressed that it was hard to get into a flow, so I only managed to make a minimal amount. Hopefully I can crack-on during the week and make some proper cash?

+£72.89 & Daily Average = +£51.35. Once again I missed a few races here and there as I was fucking about doing other chores around the house and in the garden. Did get caught by 1 or 2 moves pre-race so I'll have to be a bit more dilligent.

-£68.53. Pants day today. Just one of those frustrating and annoying days that you get every now and then and I ended the day with the right arsehole!

Had a real good time and spent most of the £90 that I made during the day.

+£50.83. Trundled throught the day today and missed most of the evening racing.

+£14.51 & Daily Average = +£43.44. Had the most tedious and boring day today. Started back on my diet again so that probably didn't help matters as I feel hungry and fucked-off!

Fucked about all afternoon for  a poxxy £14 .... felt like smashing my fist through the telly and ripping off my false eyelashes .... but had a cup of tea instead.

+£82.02. Things picked-up again today and there didn't seem to be so many annoying overlaps of the racing. Ate well and trained well and probably going to hit sub 88kg by the end of May.

-£62.42. Dug myself into a hole early doors and then continued digging! Scrambled about trying to nick a few quid back here and there in the evening but the day was a bit of a mess really.

On a positive note I had a look at Caan's blog and was glad to see that he smashed in upon his return from the Maldives. So tomorrow I think I'm going to play purely pre-race and in the win market for the whole day and see what develops.

+£48.17. Well the meetings were nicely spaced-out today so I did manage to play some IR but concentrated mostly on my pre-race. As opposed to yesterday I really enjoyed today and although the profits weren't great it was an enjoyable exercise.

+£31.73. Had a typical boring Sunday today, in stark contrast to Saturday. The markets were completely different from yesterday, both pre-race and IR, so I had to settle for a small gain.

-£5.73. Stumbled into a losing day today. This was only my second losing day this month and it was only a fiver so I'm not too sad.

Ended up with a pony .... not really enough to fund a 2 day monster beer session!

+£24.29. Feeling a tad jaded after 2 days on the beer. Played a few races today and was happy to end up with any sort of profit after my 48 hour alcohol blitz.

-£20.57. Generally stuck to the Hoegaarden on my recent trip to the coast but also indulged in some Fruli. Compliments Hoegaarden very well and I vaguely remember having a pint of Hoegaarden along with a half of Fruli around about 01:45 Tuesday morning but it cost me over eight quid so fuck knows how much the Fruli costs, but I know that it's a lot cheaper in Tesco's!!

I'm sure that I ended the night chatting to this very nice young lady, but unfortunately this wasn't the woman that I woke up with on Tuesday morning! 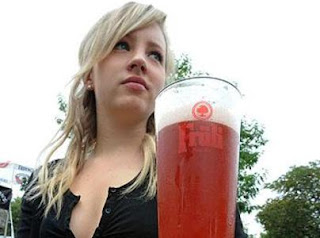