A busy end to October


Well October has seen quite a few changes in the IR market. The slow down of the SIS pictures and the associated severe lack of liquidity in the place market has really made it a hell of a lot harder to win nice sums of cash. Luckily I did kinda see this coming (back in March I think I mentioned on this Blog that the IR game would possibly implode at some point in the future). So now I'm really starting to focus on the pre-race markets. By moving into these markets I'll no longer have to worry about paying a premium for the SIS and TurfTV pics and I'll also be moving into a market (the pre-race win market) where I believe that the liquidity is still good enough for me to make cash. OK, I know that some tracks can be light in pre-race cash, but I still think that there's more than enough to meet my meagre requirements.

Accordingly I've beem immersing myself in the content of Jack Birkhead's training site 'Trading for Freedom'. I've already whizzed through his 'Journey' videos and they're great. I've traded a few races (with mixed results!), but now I'm pretty sure that I'm beginning to get the basic hang of how these markets work. Jack and Caan also presented a really interesting Webinar in the week and I found this really useful. The guys will be running these on a weekly basis and I think that they will be a great success, with like-minded traders meeting-up once a week for advice/chat/inspiration etc. PS Im not financially involved in any way with Jack's website, I just mention it as I think that it's a great and pretty unique way in which to learn a trade.

So I've been having a bit of a shop around on Gumtree, eBay and Amazon and my home setup now looks like this: 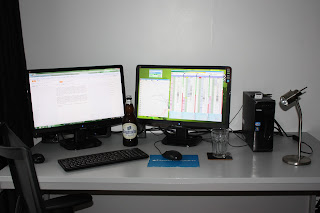 I have 2 Viewsonic 23in LED monitors attached to an Acer slimline running an i5 processor with 6gb of RAM. My SKY+ HD box (for ATR and RUK) is connected to a HDMI splitter which sends one signal to my TV and another to my left monitor using a HDMI to DVI converter. Sound comes from the audio outputs on my Sky box to speakers on my desk. All of this is completed by an emergency bottle of Hoegaarden (only to be opened in times of stress and/or excitement!).

You never know, I might become the new Adam Heathcote!
Posted by TraderDave at 02:04 6 comments: 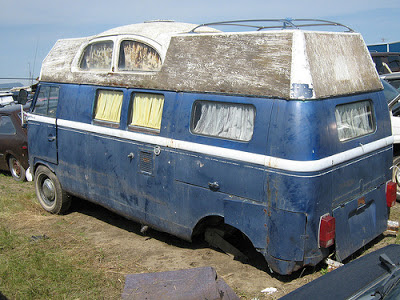